Macy’s is turning to pop-up stores to spark sales from CNBC.

The program gives pods of space to a handful of brands and companies on Macy’s ground floor to promote or sell their products. It is aimed at giving Macy’s customers more variety to their shopping and the Cincinnati-based retailer insight into what they like. For their branded partners, it bestows an opportunity to have brick-and-mortar presence they may lack.

“Overwhelmingly, what we think makes this so attractive for Macy’s and our customers is it continues to drive customers to stores by giving a constant break of discovery,” said Marc Mastronardi, EVP of new business development and innovation at Macy’s.

“We have not [before] had a model in which we have provided [Macy’s retail service] to a really diverse set of categories coming into our space.”

Retailers of all sorts have turned to pop-ups and partnerships to create variety in their stores and exposure to new brands. Mall owner Simon Property Group last year rolled out a permanent house for pop-ups in its Roosevelt Field mall.

They are also looking beyond the pop-up: Saks launched “the Wellery,” a section of its second floor dedicated to wellness classes and services. Kohl’s is looking to partner with a convenience or grocery store.

Macy’s distinguishes the Market from traditional pop-ups in that the department store carries the heavy lifting: Sales associates working for the Market will work exclusively to service the brands, an offer of particular use for companies without retail experience. Macy’s also offers the potential to scale through its footprint and a flexible approach to timing, allowing pop-ups to stay as little as a month.

Brands pay a one-time fee for the space and retain all their sales. 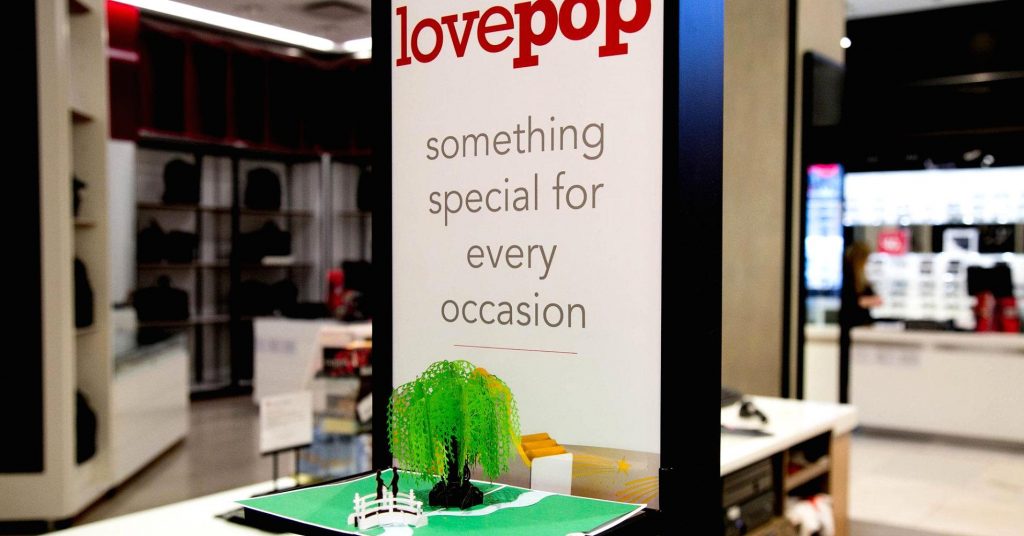 The program, which formally launches Monday, will initially be tried in 10 cities, including at the Herald Square flagship in New York, Boston, Las Vegas and Fort Lauderdale, Florida.
After six months, Macy’s will assess the impact on the brand’s sales, foot traffic and insights its gleaned as it decides whether and where to further expand the program.

Most, but not all, of the brands will be unique to the city they are in. At Herald Square, Sony Pictures has a pop-up promoting its new “Peter Rabbit” movie in February, and Resa is offering 3-D printed custom orthotics through July. The Macy’s Twelve Oaks in Novi, Michigan, features a “Detroit is the New Black” pop-up through March. Bear Mattress, the mattress company for athlete recovery, has a spot in Alderwood, Washington.

The pop-up efforts come as Macy’s and its rivals rethink their real estate and business models amid a changing landscape. Brands have fought back against department stores fighting for market share with deep discounts by withholding their inventory and creating platforms to go directly to shoppers.

Macy’s stock, which in Monday’s premarket was trading at $24 a share, is down 46 percent since November 2016. A relatively strong holiday season, though, along with more positive investor sentiment toward retail, has lifted its stock price over the past couple of months.

As part of its efforts to reclaim its place in retail, Macy’s has laid out its North Star Strategy, a five-prong plan with emphasis on goals like exclusive products and improved customer experience.

The pop-up strategy fits in Macy’s “what’s new what’s next” tip of the star, a focus on innovation and technology.

“For really minimal company investment, we were able to take the capabilities that we already have and package them in a way that is creating a new revenue stream, product discovery and something that is good for the customer,” said Mastronardi.

Posted in Potential Pop-Ups.
It's Quick & Simple to Secure Your Pop-Up Storefront

1. Fill out our simple Request A Storefront form to secure this space.

2. Connect with the space owner and set-up a walk through and review all the aspects of the rental.

3. Call us directly to discuss any Potential Pop-up you see listed on this site. CALL SALES AT: 212-251-0621 or email: sales@popupinsider.com.

4.To insure that your pop-up is a success get guidance and pop-up expertise from Christina Norsig. Learn how to proceed with insurance, design and marketing of your pop-up shop.